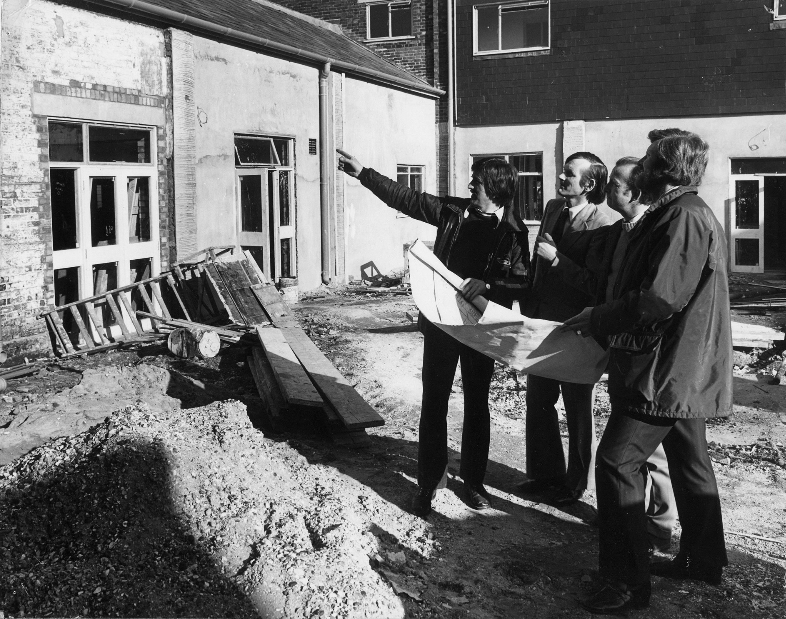 Plans under scrutiny in 1974

The buildings that make up Alton Community Centre have a long and varied history. Whilst there are not many photographs of it prior to it being a community centre, we know that it started out life as Fielder's Brewery, then becoming Wey Iron Works (from 1865), fire station, warehouse, Kerridge car workshop (from 1938), ARP (Air Raid Precautions) station and an underwear factory. The oldest parts of the building are the rear range (facing Cut Pound) and what is now the 'Members' Room'. There was also another part of the building that adjoined the rear range along with two hop kilns, but this was demolished to make way for the bus station (now occupied by Berkeley House). There is a full history of this written by local historian Jane Hurst that we hope to include here at a later date. See photographs of the centre at the bottom of this page.

Here are some snippets of information gathered from the Internet. According to research done by local historian Jane Hurst and published in the Alton Society Newsletter, the empty site became associated with the Fielder family in 1784 when they bought the building later known as the Leathern Bottle. However, it was probably another thirty years before Moses Fielder and his son John started to build the brewery that occupied the land next to the Leathern Bottle.

William Curtis, after whom Alton’s museum was named, wrote a book called 'History of Alton' published in 1896. Here he says, "The Wey Iron Works are situated in Cut Pound, on the site formerly occupied by a brewery in the occupation of Mr. Fielder. They were started in the year 1865 by Messrs. Hetherington. The firm after a time changed to Hetherington and Moore, then to Hetherington and Parker. It is now known by the name of Hetherington and Co. The business works are principally for agricultural purposes, hop-drying apparatus, and cart and waggon building, etc."

The Farmers' magazine of July 1873 includes a report of the Royal Counties Agricultural Society meeting in Southampton, mentioning that one of the exhibitors was "Hetherington and Parker, The Wey Iron Works, Alton."

The Museum of Farnham record 144/D/03 lists: "John Henry Knight's Patent Digging Machine. From 1872-1890, Knight was a farmer and ran Badshot Farm. The Farnham hop trade was at its peak, but labour was intensive. Experiencing difficulty in recruiting suitable workers, he set about designing a machine to turn over the soil instead. Knight ordered the first full-sized prototype from Wey Iron Works at Alton and it was tested at Badshot Farm in October 1874. Despite great efforts to market this invention, no local hop growers seemed to be interested. He took the machine to a number of agricultural exhibitions but no orders were forthcoming." They also have a flyer from 1878 with an illustration of the patent digging machine.

The next mention found of the Wey Iron Works is when owner Walter Mantell Parker went bankrupt, as reported in the London Gazette on 3rd December 1880: "The Bankruptcy Act, 1869. In the County Court of Hampshire, holden at Winchester. In the Matter of Proceedings for Liquidation by Arrangement or Composition with Creditors, instituted by Walter Mantell Parker, of the Wey Iron Works, Alton, and of 4, Anstey-villas, Anstey, Alton, in the county of Hants, and late of the Abbey Foundry, Winchester, in the same county, Engineer, Machinist, Millwright, Brass and Iron Founder, Agricultural Implement Maker, and Agent, trading under the style of Parker and Co. The creditors of the above-named Walter Mantell Parker who have not already proved their debts, are required, on or before the 17th day of December, 1880, to send their names and addresses, and the particulars of their debts or claims, to me, the undersigned, John Macdonald Henderson, of 2, Moorgate street buildings, in the city of London, the Trustee under the liquidation, or in default thereof they will be excluded from the benefit of the Dividend proposed to be declared.—Dated this 30th day of November, 1880. J. M. HENDERSON, Trustee."

There is a reference to the establishment of a new company to run the Wey Iron Works in 'The Iron' newspaper dated 12th May 1893 saying: "NEW COMPANIES. ALFRED HETHERINGTON & CO., LIMITED.—This company was registered on May 3, with a capital of £12,000, in £1 shares, to purchase and work Hetherington's English patents for improvements made in drying hops, to acquire the Wey Ironworks, Alton, Hants, and to carry on the business of iron and brass founders, makers of agricultural implements, &c. Registered by Jordan & Sons, 120, Chancery Lane, W.C. Registered office, The Wey Ironworks, Cutpound, Alton, Hants. The subscribers are :—W. G. Nicholson, Basing Park, Alton, engineer; A. F. M. Downes, Alton; S. W. Seward, Petersfield; F. Crowley, Alton; J. A. J. Scott, Alton; W. Udal, Bedford; A. C. Hetherington, Alton, Hants, ironmonger."

Returning to the establishment of Alton Community Centre, we are fortunate to have photos taken when the building was being converted from a factory in 1974/5, so we include them here for your interest. Note that the photos taken of the interior of the building prior to conversion are all blurred due to camera shake. You can click on the photos to enlarge them and can cycle through them using the small arrows that appear at the side of the photos. Click outside the area of the enlarged photo to close it.